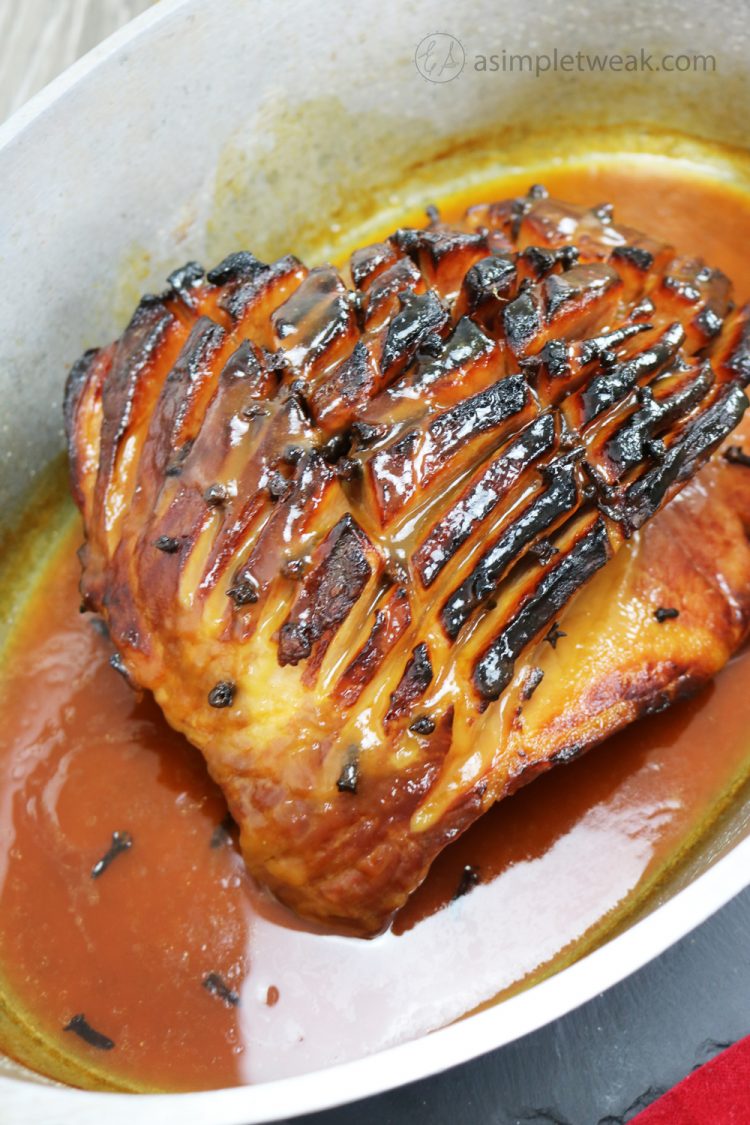 Entertaining doesn’t get easier this year. Get ready to impress your loved ones with this Baked Ham with Pineapple Honey Glaze. The flavor in this ham and the sweetness of the glaze are absolutely addicting. This ham was easy to make, and best of all, it’s moist and juicy. 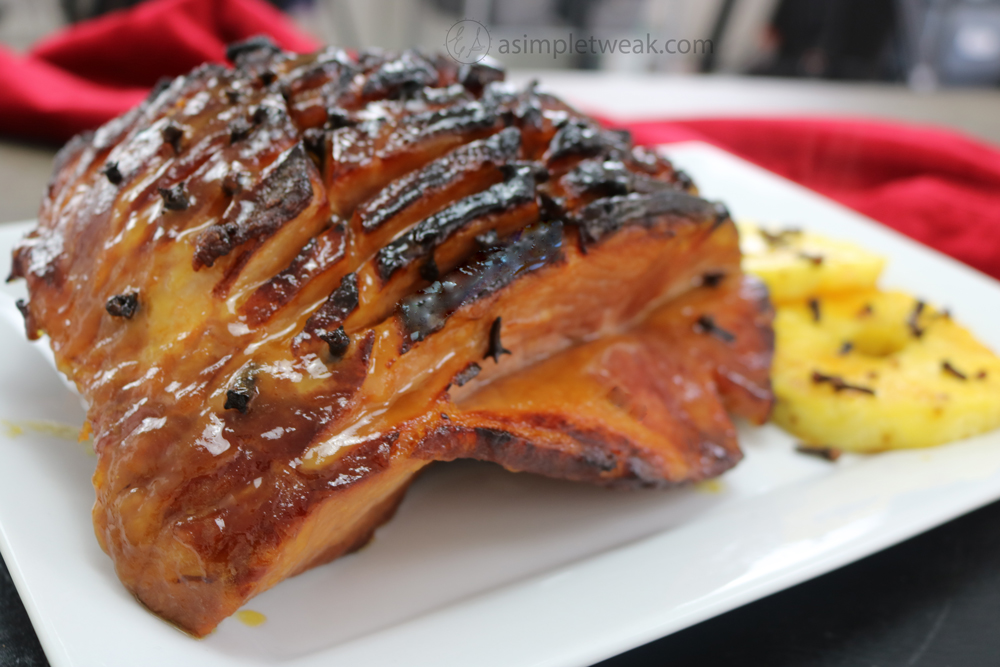 You can never go wrong with a delicious Ham on the dinner table. Whether you are looking for Spiral Ham glazed with a simple raspberry sauce, Orange Fig Glazed Ham, or This Baked Ham with Pineapple Honey Glaze, I have you covered! 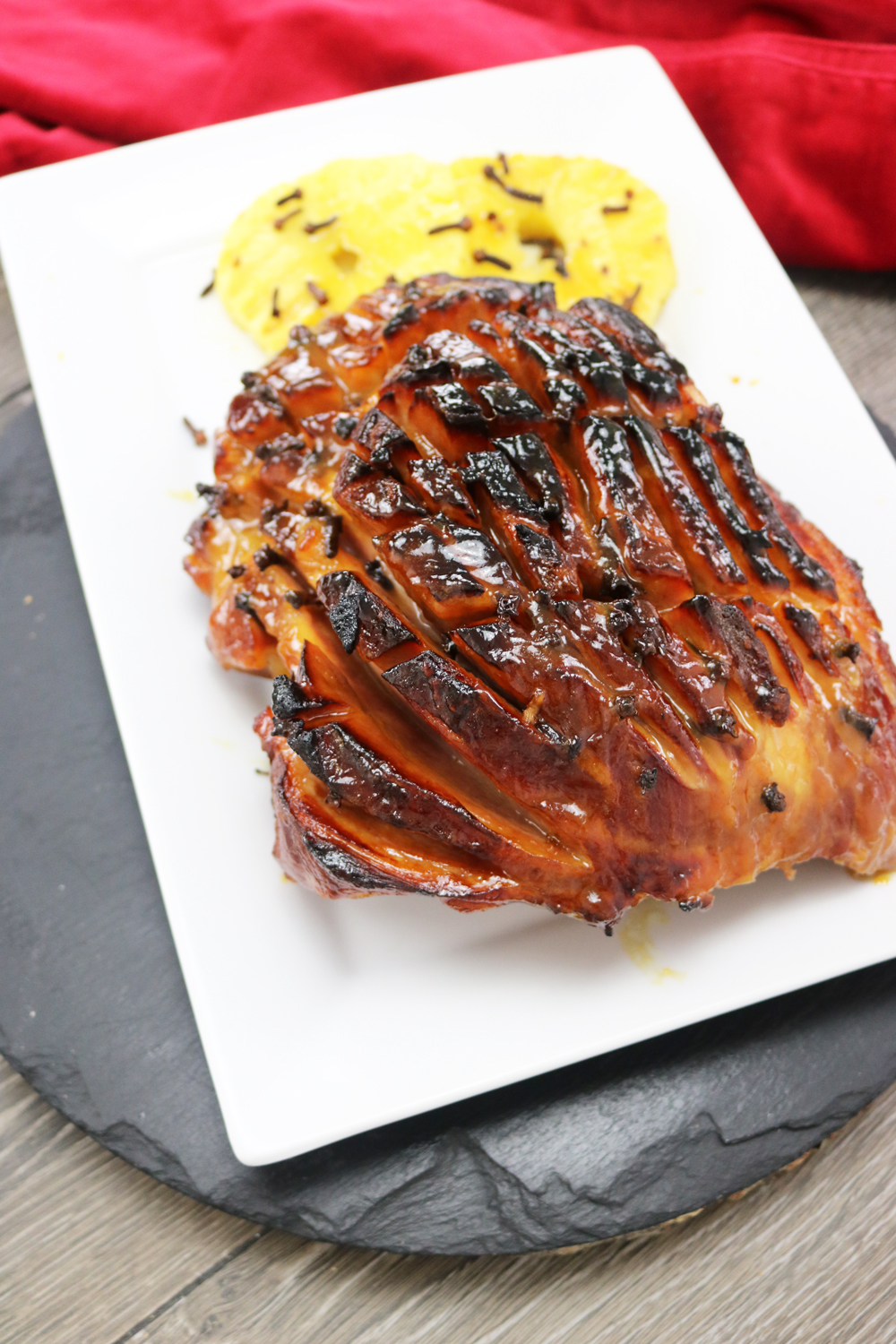 The festive season is around the corner, and for many of us, that marks the time for gatherings with our loved ones. This time of year is excellent for many reasons; cooking my family’s favorite dishes is one. There’s nothing like This rich and Creamy Pumpkin Spice Hot Chocolate, perfect for the fall, winter, and any other time.  This is a drink that gives us so much warmth and coziness during the cold days ahead. I also get ready for one of our favorite celebrations, Thanksgiving. During this time, I like to prepare what we call Holiday Potato Salad, which we love to pair with a juicy Fuss-Free Roasted Turkey or a juicy and extra crispy Roasted Chicken.  And if you are looking for a delicious and simple dessert for the coming holidays? This Pumpkin Flan Recipe will stop your search! As you can see, holiday recipes are essential on this blog.

Make this delicious Ham with Pineapple Honey Glaze Recipe, and I assure you your holiday dinner table will not be the same.

Recently, on one of my shopping trips to Costco, I discovered they sell a variety of ham. The ham quality of their Kirkland signature is amazing, especially for the price. To make this recipe, I got an applewood smoked fully cooked boneless half ham. What I love about an already cooked ham, especially during the holidays, is that it saves you time and it is a No-fuss dish, and you have a deliciously, easy, tender, juicy ham at the table.

How to Make This Pineapple Honey-Glazed Ham

The first step is simple, Score the ham. To do this, use a sharp knife and, Starting from one end of the bottom of the ham, cut about 1/3 of an inch, making lines 1″ apart on the ham. Repeat, making slits in the opposite directions.

Scoring the ham is essential.

Hams have a thick layer on top covering the meat that needs to be cracked to allow the glaze to trickle into those openings to infuse the ham with so much flavor. It also makes the ham looks excellent for dinner time presentation and easy to serve.

This ham is an applewood smoked, and it has a lot of flavors on its own. However, I decided to enhance the flavors by studding the ham with whole cloves. So in each of those cracks, I inserted one clove. I used about ½ cup of cloves. This is an optional step.

Next,  place the ham in a baking pan and cover it with a large sheet of heavy-duty foil—Cook at 350°F  for 40 minutes. In the meanwhile, make the glaze. 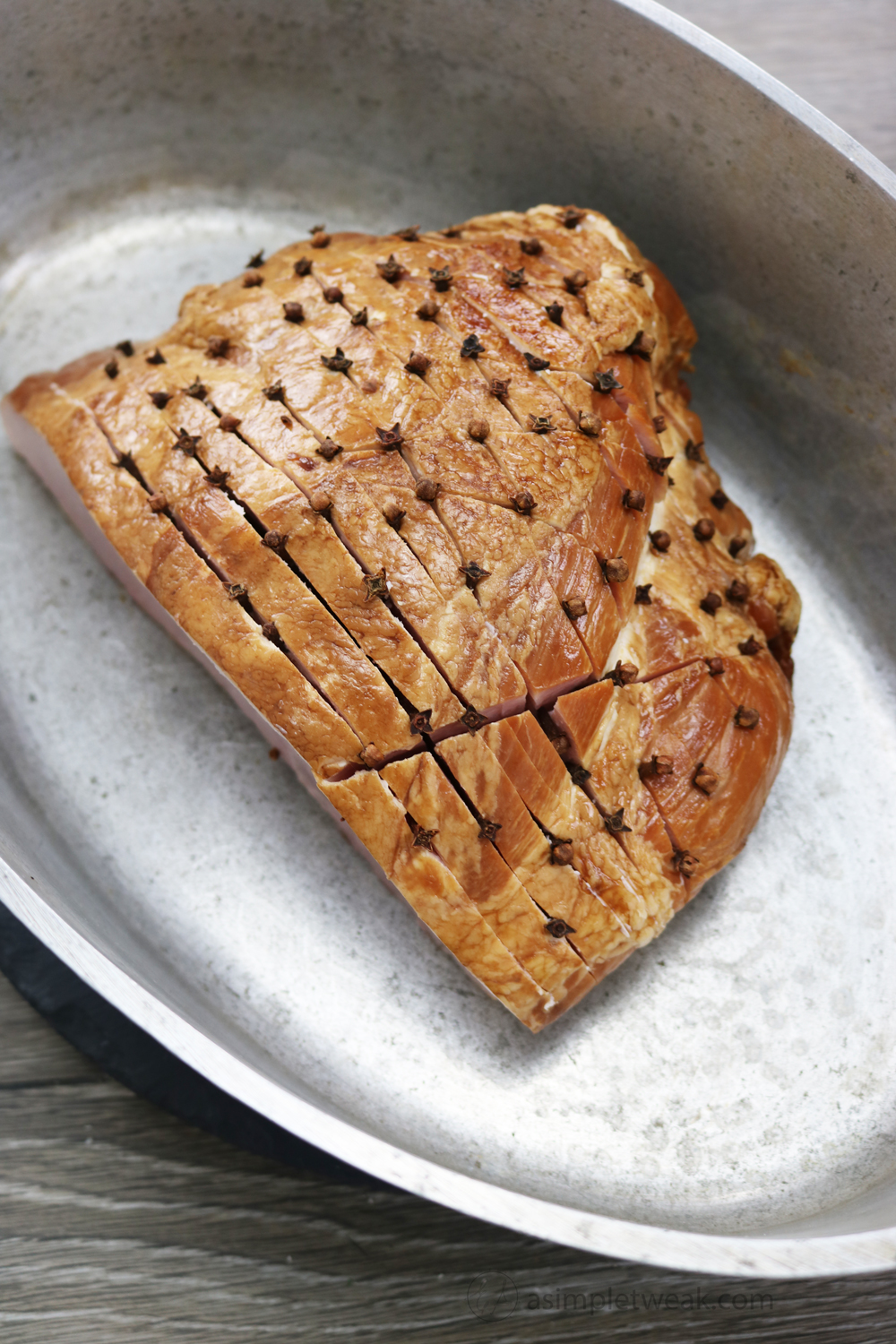 How to make the Pineapple Honey Glaze:

This is when the pineapple shines. To make this glaze, I use fresh pineapples, but you can also use the can fruit. In this recipe, pineapples are used as a garnish and part of this delicious glaze that gives the ham an exquisite flavor.

First, blend the pineapple chunks, just like that. No water is needed. If you decide to use canned pineapples, you can add the juices that come with them. 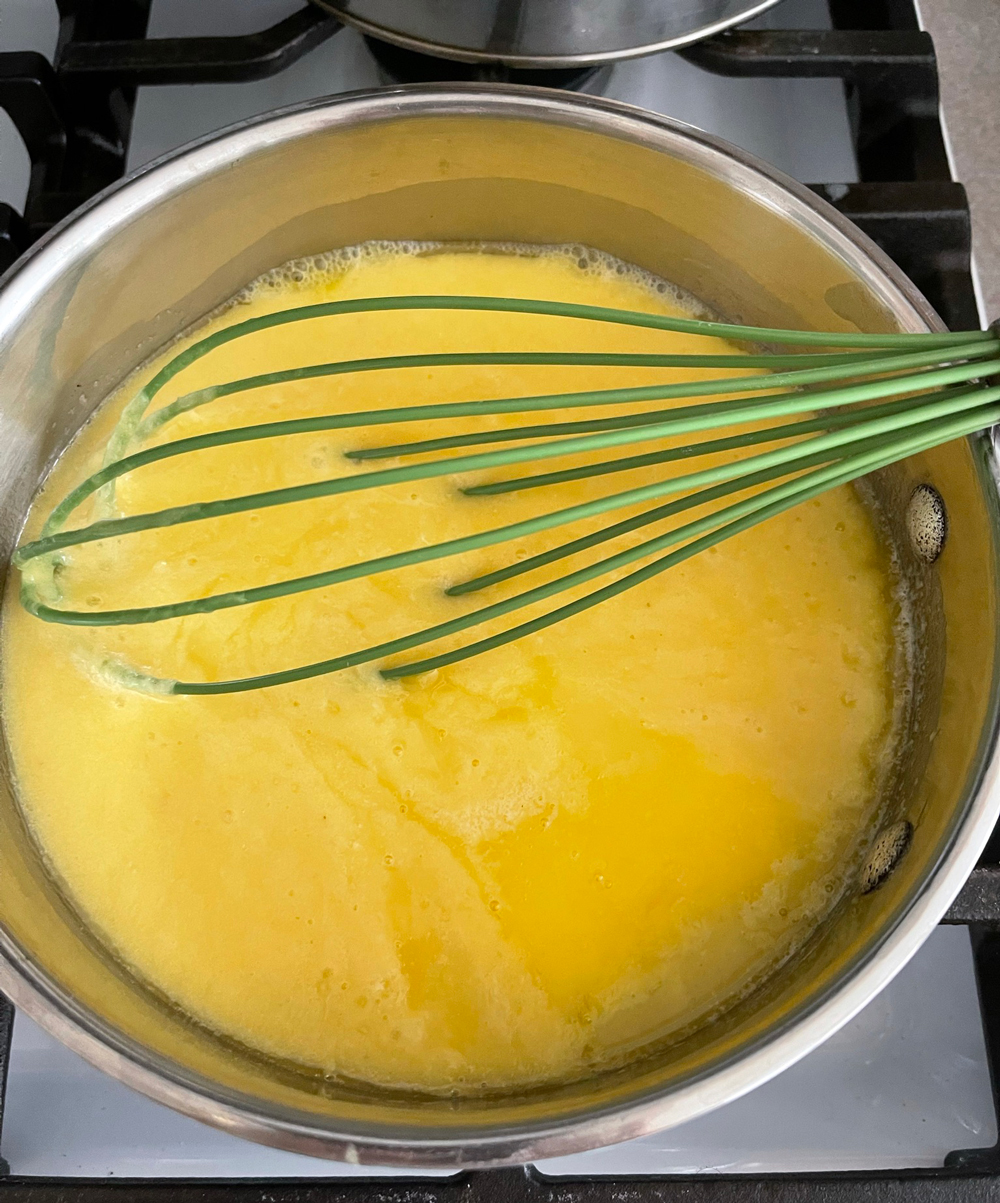 Then, in a saucepan over medium-low heat, add three tablespoons of unsalted butter, pineapple mixture, ½ cup of honey, ¼ cup of brown sugar, and whisk to combine. Increase heat to medium-high and bring to a boil. Cook and stir for 2 minutes until thickened and bubbly. Set aside. 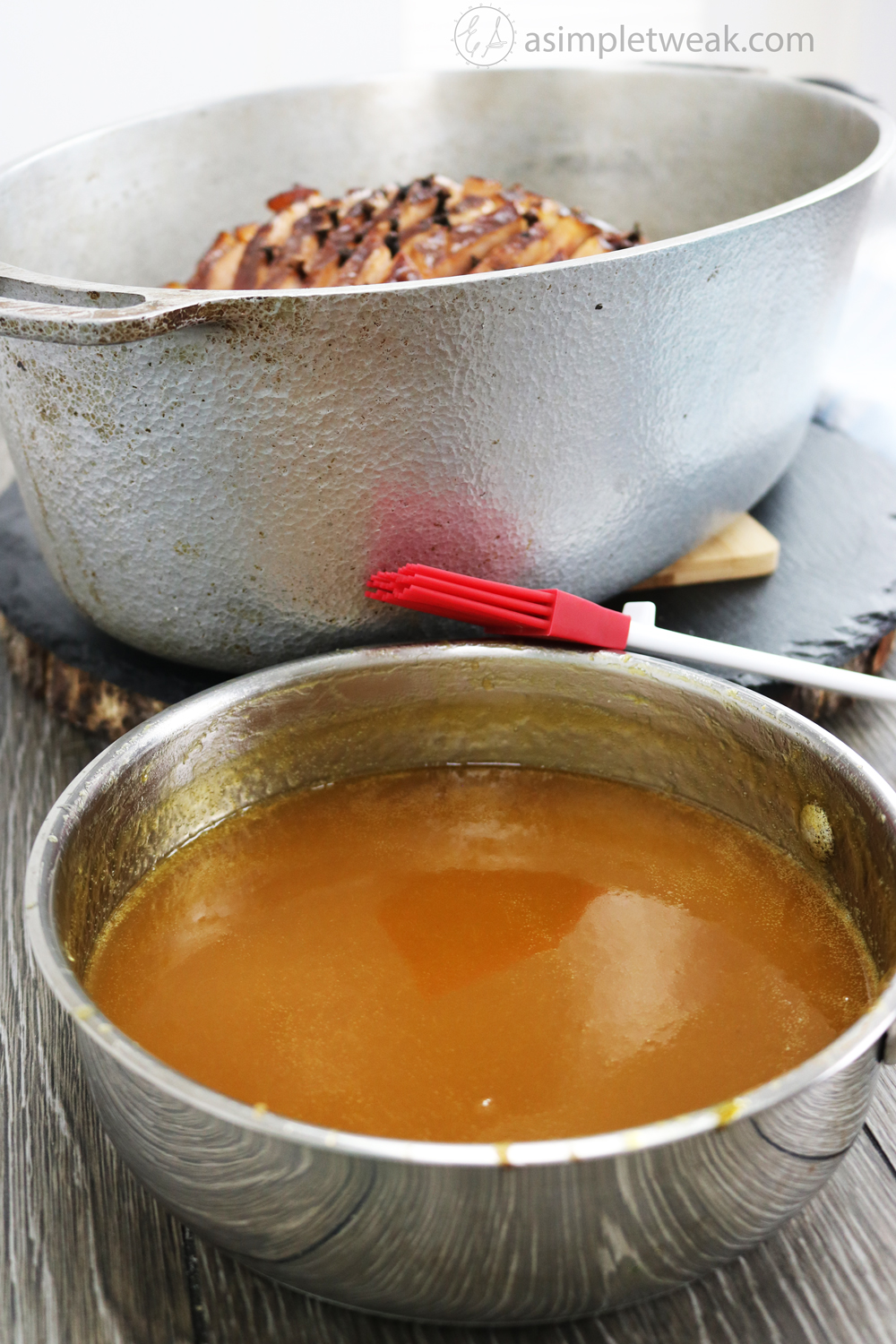 After the 40 minutes have passed, remove ham from the oven (keep it on), brush a good amount of the pineapple honey glaze over the ham, and take it back into the oven (uncover) and continue cooking. 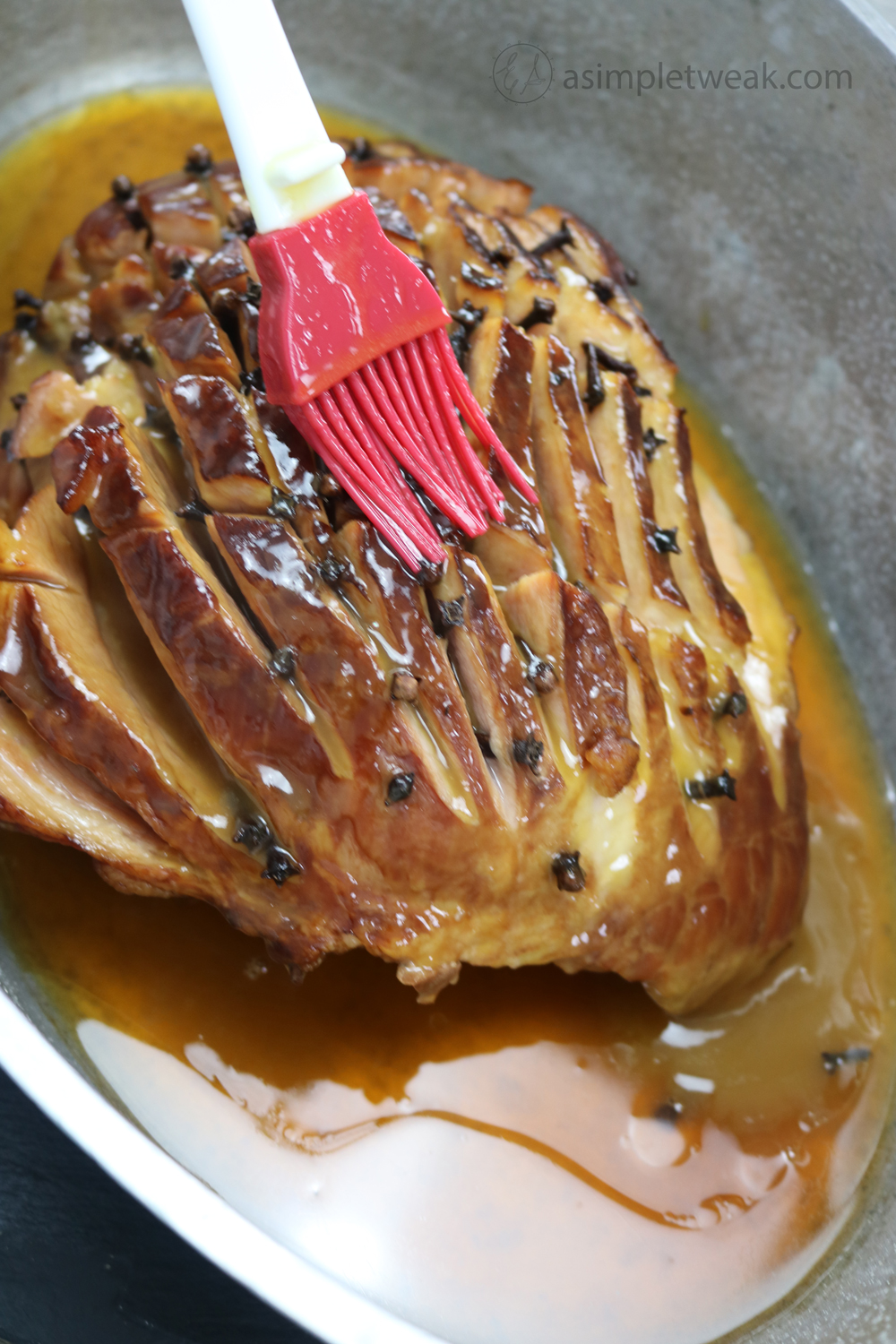 Baste ham every 10 to 15 minutes with the glaze. During the last 5 minutes of baking, increase the oven’s temperature to 450°F  to caramelize the glaze.

Remove from oven, and let sit a few minutes before serving.

WHAT TO SERVE WITH THIS DELICIOUS HAM:

Below you will find a convenient printable recipe card. 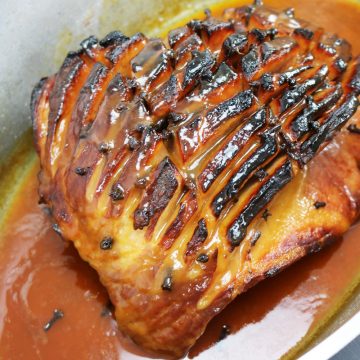 Entertaining doesn’t get easier this year. Get ready to impress your loved ones with this Baked Ham with Pineapple Honey Glaze. The flavor in this ham and the sweetness of the glaze are absolutely addicting. This ham was easy to make, and best of all, it's moist and juicy.
4.50 from 2 votes
Print Pin Rate
Course: Main Course
Cuisine: American
Prep Time: 10 minutes
Cook Time: 50 minutes
Servings: 15 servings
Calories: 102kcal
Author: Evelyn Savinon ( A Simple Tweak)

How to make the Pineapple Honey Glaze:

Nutrition information is calculated using an ingredient database and should be considered an estimate.

Let me know what you think about this recipe, and don’t forget to contact me if you have any questions. It’s always a pleasure to hear from YOU! Don’t forget to follow me on Instagram.

Until the next one…

This site uses Akismet to reduce spam. Learn how your comment data is processed. 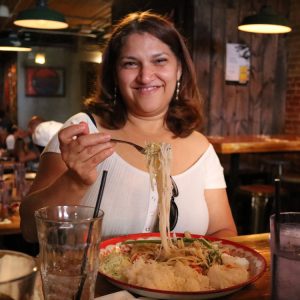 Hi there, … Nice to meet you! I’m the cook, writer, and photographer behind this blog. I have always taken joy in the task of cooking. In the summer of 2016, the idea for A Simple Tweak was born. I learned to discover that cooking is more than a task for me. It is a whole-hearted passion of mine.